A bold departure from its humble safari lodge beginnings, Cheetah Plains has undergone a complete metamorphosis. Today, it is a beacon to the eco-luxe safari set and a collaborative expression of South Africa’s rich heritage. Proud owner, Japie van Niekerk’s vision for the property is finally realised.

Each of the exclusive-use Plains Houses at Cheetah Plains accommodates a minimum of 4 and a maximum of 8 guests per house, offering you and your safari companions the ultimate private safari experience in the splendid Sabi Sand Game Reserve.

Cheetah Plains Private Reserve comprises an exclusive traverse area set aside for our Cheetah Plains guests.  We do, however, explore the greater area which extends many thousands of hectares beyond our location in the pristine north-west corner of the vast Sabi Sand Game Reserve.  Our particular area is revered for its prime game viewing, most especially the iconic species known as the ‘Big Five’.

We share our fenceless border to the east with the vast, world famous Kruger National Park and our southern border with the esteemed Mala Mala Game Reserve.  Cheetah Plains’ prime location within the inimitable Sabi Sands delivers a prolific, sustainable safari experience facilitated by the natural movement of wildlife over this vast land, fiercely protected under conservation.

The Sabi Private Game Reserve was formed in 1934, and was the forerunner of the Sabi Sand Wildtuin, which was established in 1948. It is the oldest private game reserve in South Africa and the birthplace of sustainable wildlife tourism in Southern Africa.

A formal association of landowners, many operating commercial safaris, Sabi Sand Game Reserve’s goal is to promote and conserve the fauna and flora in the area and preserve the area as a wildlife sanctuary.

All lodges in the greater Sabi Sand area are involved in environmental management such as alien plant control, combating erosion, monitoring wildlife, anti-poaching and fire control.

Two rivers cross Sabi Sand: the Sabi River on its boundary in the south and the Sand River that flows from northwest to southeast. This has resulted in an abundance of leopard, lion, rhino, elephant, buffalo, cheetah, zebra, giraffe, hyena and a wide variety of antelope and other species. To date 330 trees, 45 fish, 30 amphibian, 110 reptiles, 500 bird and 145 mammal species have been noted in Sabi Sand.

A number of endangered species have also made the reserve their home, and visitors to the area are often given a rare glimpse of Honey Badgers, Ground Hornbills and Wild Dogs.

Cheetah Plains is a pioneer in its class and the undisputed home of the definitive upscale eco-safari in the Sabi Sand Game Reserve. Our expert team of safari guides and trackers will guide your personal discovery of this prolific, significant conservancy. Owner Japie van Niekerk’s singular approach to sustainability within our footprint on the Sabi Sands delivers an eco-safari of unrivalled quality.

We have partnered with some of the world’s pre-eminent minds in the renewable energy field to provide clean energy solutions that drive both our hospitality and safari experiences here at Cheetah Plains. Guest accommodation is entirely ‘off the grid’, harnessing the power of solar to provide us with a reliable, renewable energy source at Cheetah Plains. Use of grey-water recycling systems ensures our water consumption on the property remains as frugal as possible.

Further carbon footprint-reducing innovations include the use of single-glazed, clear, low-E glazing throughout the Plains Houses. This energy saving glass reduces heat transfer through windows, keeping interiors cooler in summer and effectively retains heat in winter.

Creating local employment and supporting the local early childhood development centre in our neighbouring community of Utah are additional tangible ways in which our holistic approach towards sustainability is being lived out. Additionally, all suitable food wastage accumulated at Cheetah Plains, is collected and transported to Utah 2-3 times a week, for use as pig fodder.

Cheetah Plains Private Game Reserve is on 220 volts with a backup generator. Water supply is via a borehole, is clean & can be consumed, however, we do have filtered water for drinking available in the main lodge areas and your room. 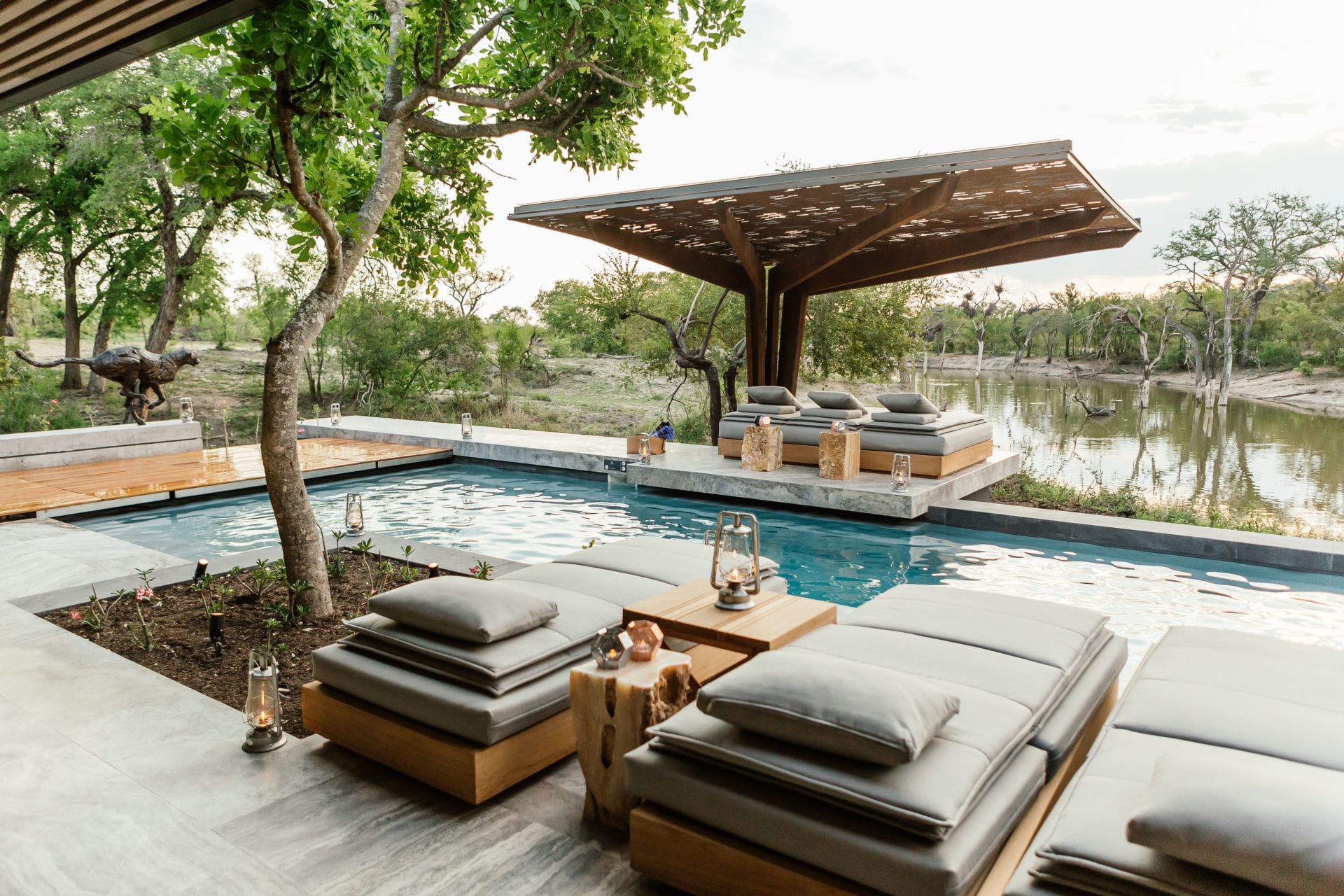 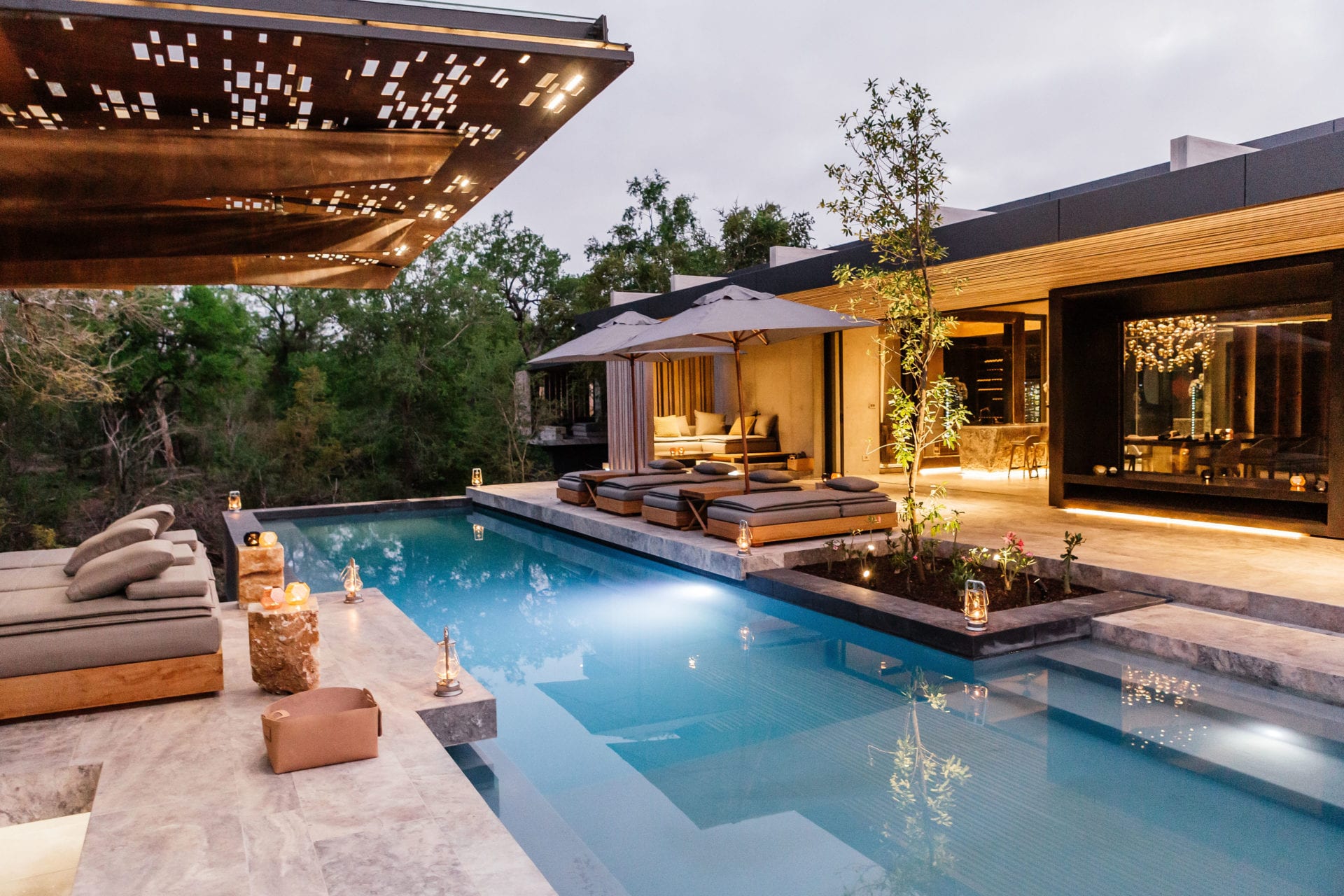 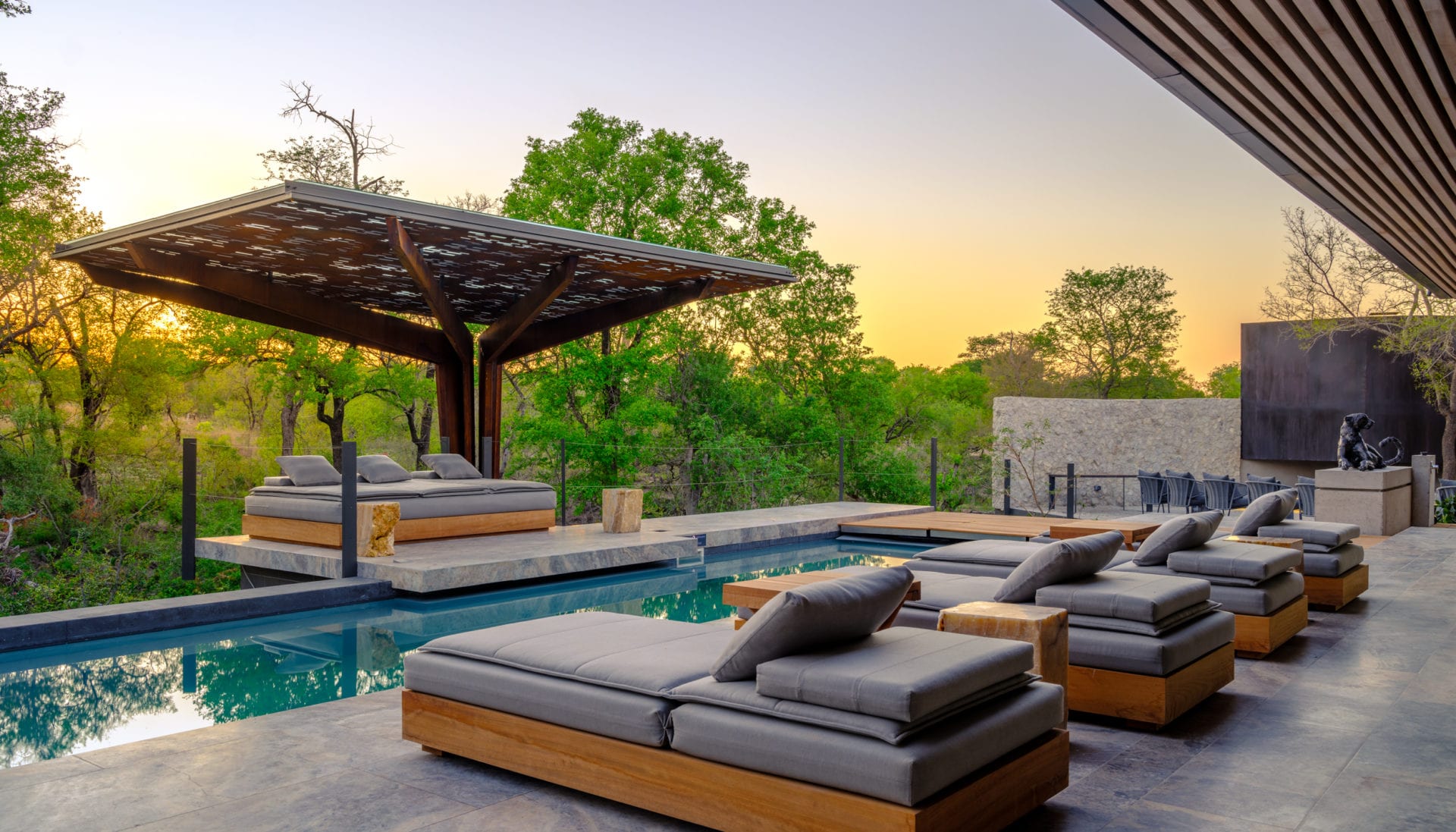 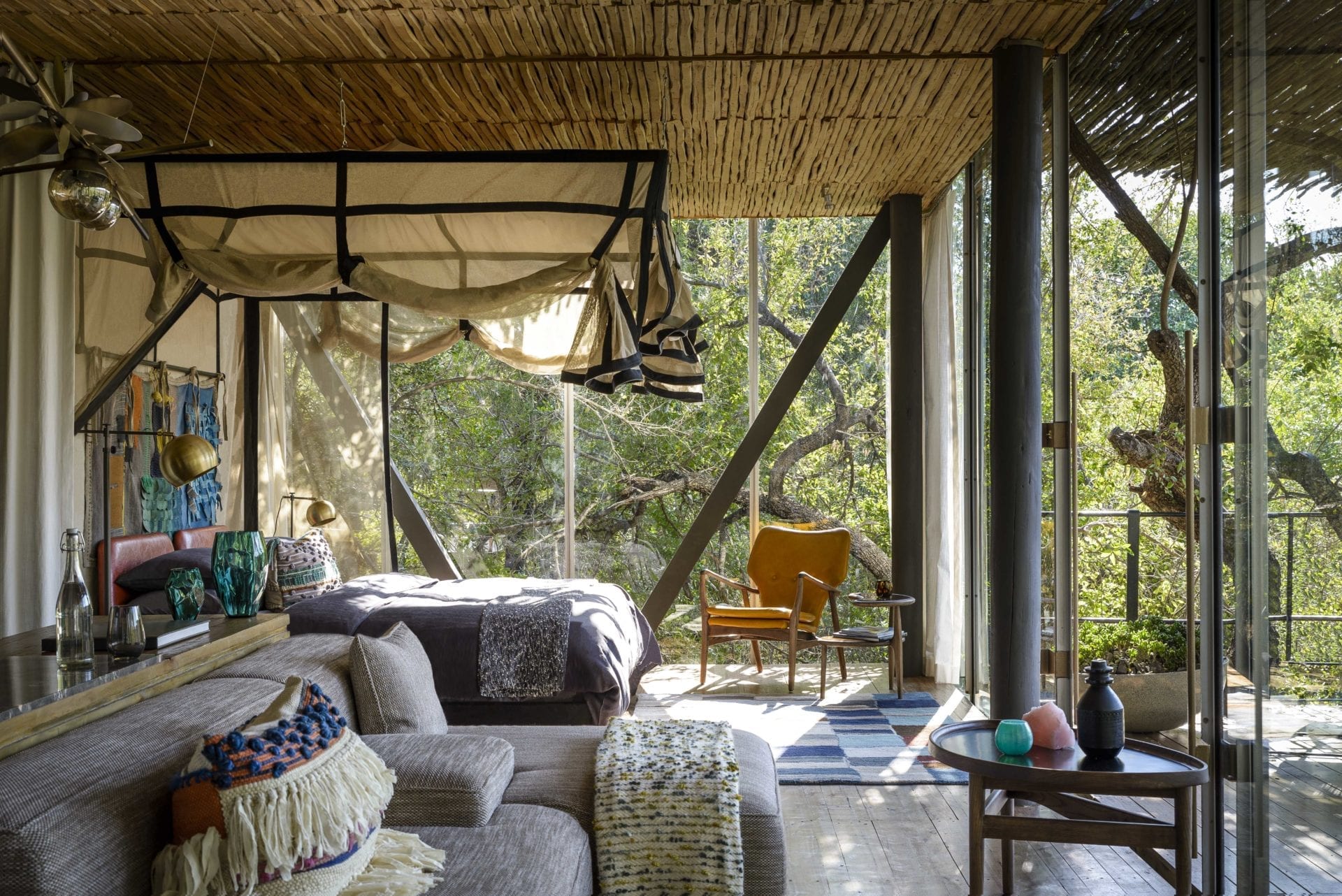 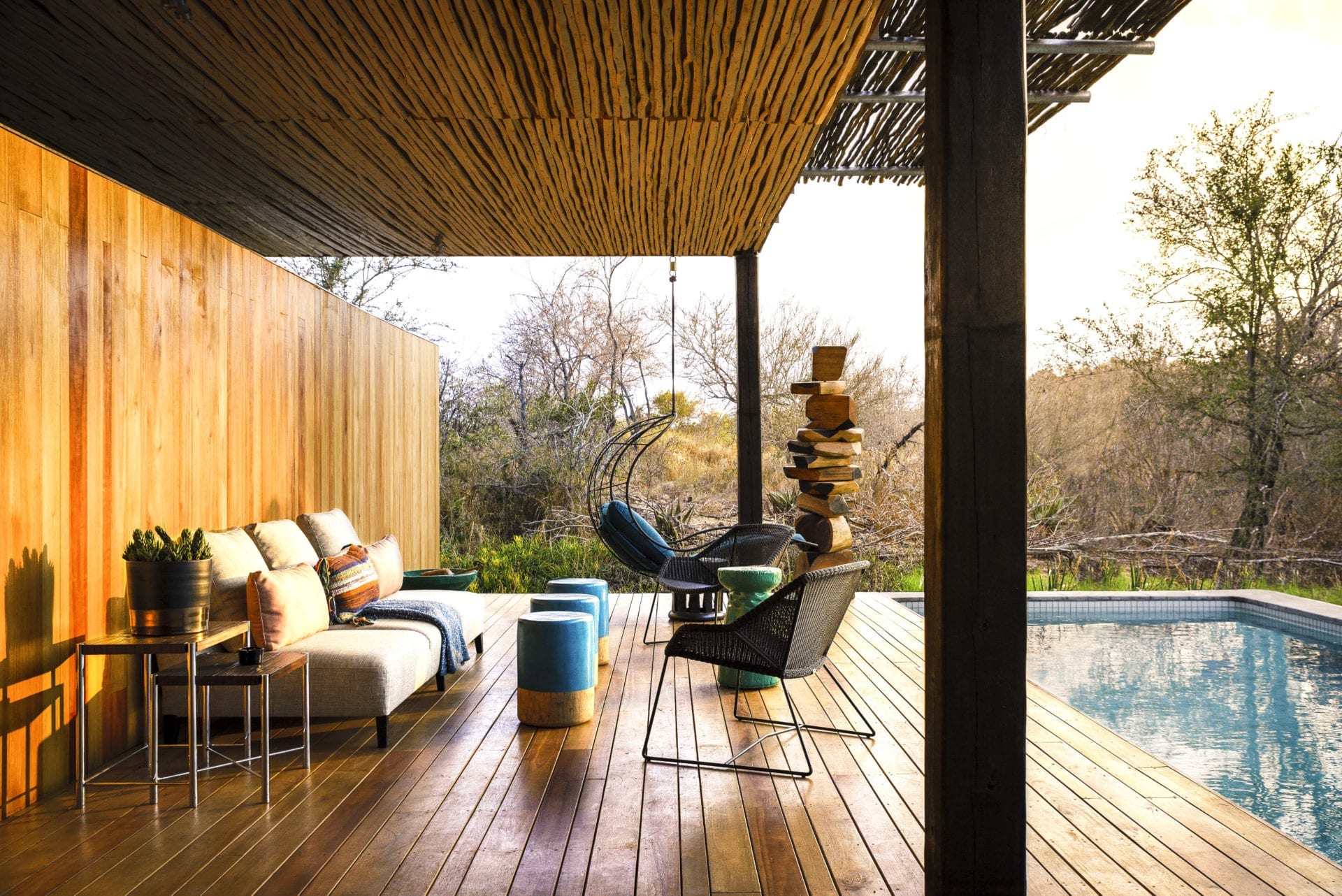 Whether you fly directly to Cheetah Plains on one of the daily scheduled flights from Johannesburg or Nelspruit, or via Madikwe, Cheetah Plains is easily accessible by air.

Gate fees are payable upon arrival. Airstrip passenger taxes apply to passengers on all flights.

Daily flights are available on SA Airlink and Federal Air. (If flying with Federal Air, storage facilities for extra or large luggage is available, should you require this service at their O R Tambo departure lounge).

Weekly flights Sabi Sand – Madikwe every Monday, Wednesday & Friday (Based on a minimum of 4 Guests)

Airports are located within easy driving distance to Cheetah Plains: Arathusa Airstrip is approximately a 20-minute drive within the reserve (usually provided in an open game viewing vehicle), whereas Hoedspruit Airport takes about 1.5 hours and allow 3 hours to Kruger Mpumalanga International Airport.

Please note that it is advisable to carry a small duffel bag or soft case (20 kg limit) in your main suitcase for your time at the lodge. The airlines do not accept rigid cases but will store them while you are at Cheetah Plains, so you will have to pack your soft bag with your clothing and other equipment for your safari, and then leave the hard suitcase at the airline offices, where they will take care of it.

For the ultimate in a connected, immersive experience embark on a guided interpretive bush walk on the plains that gave birth to its namesake, Cheetah Plains.

There is no more tangible way than this to surround yourself with nature; senses are sharpened and a profound appreciation of one’s place within the ecosystem is deeply felt.

We love families! Children of all ages are most welcome at Cheetah Plains.

Our bespoke children’s safari program, Cheetah Cub Club, for children under 12 years old is wildly popular with our younger guests. Educational, engaging and fun, each child receives a backpack stuffed with exciting activities to enjoy on safari, with our compliments.

Our highly qualified, relatable field guides and trackers are eager to share their bush lore with young, inquisitive minds.

Bush bumbles (game drives of age appropriate duration), interpretive walks in our garden or simply chatting with our team about their way of life in the bushveld help your child to forge a deep connection with Africa’s wilderness.

Awakening them to nature’s splendour is our privilege.

Our Plains Houses have great child-friendly features such as a set of inter-leading Private Suites, a living room with state-of-the-art audio-visual equipment, a games selection and Netflix.

Imaginative kiddies’ meals are the order of the day as are interactive cooking sessions with your Plains House chef.  Babysitting by our qualified, caring nannies is complimentary and always on offer.

Our individualistic approach to family safaris is what sets us apart in the Sabi Sand. It starts with a conversation and ends with safari memories of a lifetime.

Sporting beautiful views out over our rolling lawns and Tamboti grove beyond, our climate-controlled gym is fitted with modern equipment for your training pleasure.

The best time of day to explore the bush is early morning and late afternoon.  Our twice-daily game drives are led by our best-in-class safari guides and trackers and taken in our prototype Land Cruiser Electric safari vehicles, a game-changing innovation pioneered by Japie van Niekerk, owner of Cheetah Plains.  This bold advance toward zero-emission game drives is what drives our sustainability safari experience at Cheetah Plains.

An onboard bird book, binoculars and a professional level Nikon D850 camera fitted with a 200-500mm telephoto lens plus memory card are provided for guests’ enjoyment.

ach Land Cruiser Electric vehicle that ranges our vast, prolific traverse has a maximum of 8 comfortable bucket seats, individually set at the optimal recline level of 11 degrees, tried and tested by owner, Japie van Niekerk.  Working closely with the prototype agents, Japie has personally ensured the vehicles’ specialist design and powerful torque rival that of its fossil-fueled counterparts, delivering an elevated safari experience bar none.

Our 4×4 game viewers do not require cumbersome gear changes, thus ensuring a smooth, quiet driving experience, getting you closer to sightings in the most unobtrusive way. Top speed (up to 65 km/hour), agility and torque have all been rigorously stress-tested, leaving nothing to chance. The advanced 600mm water-resistant engine sports low range and differential lock features, leaving passé diesel models in the dust.

We welcome you to visit the nearby village of Utah where many of our staff live with their families.  Experience the many ways in which Cheetah Plains is a powerful catalyst for transformation in this area.

Meet the people on your guided visit and observe local traditions of our local Shangaan culture.  Come away with a deeper understanding of South Africa as a nation and those who live out the Cheetah Plains dream on a day to day basis.

The restorative quality of your safari is enhanced by personal pampering.  We invite you to enjoy a selection of touch therapies or beauty treatments, all included in your stay.  Africology is our chosen wellness amenity brand.

Consult your in-room menu which offers an array of uplifting treatments including manicures, pedicures and facials.  Alternatively, tailor your personal wellness journey with the help of your highly qualified in-house therapist.

Enjoy your pampering in the privacy of your Private Suite, allowing the restorative experience to completely envelope you.